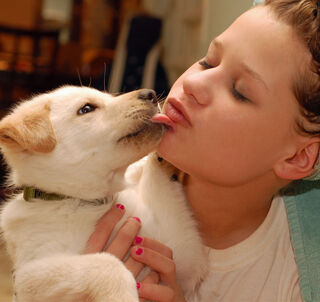 What does it mean when a dog licks your hand? Mothers explain this behavior to their young children with words like “Look dear, Lassie is giving you dog kisses.” Unfortunately, this explanation is often not correct. Licking behaviors can mean many different things, depending on the context, and dog licks cannot be interpreted simply as kissing and affection.

In Western cultures, we tend to assume that kissing is most often applied directly to the face and sometimes to the hands in formal social contact. Dogs are less focused in their “kissing.” While dogs will lick faces if they get the chance, they will also lick hands, feet, knees, or whatever they can get close enough to get their tongues on.

Of course, people who assume that dogs’ licking is the equivalent of kissing are not thinking of sexual-romantic kissing. It may be a surprise to hear, but romantic face kissing is not universal – not even close. A cross-cultural analysis of kissing in 168 societies found that less than half (46%) kiss on the face and lips. There are definitely some cultural factors involved, since couples in economically developed and socially stratified cultures are almost 3 times more likely to kiss on the lips than those who live in tribes.

However, putting romance and sex aside, kissing usually takes place as part of a greeting ritual in humans and primates. You kiss Aunt Sylvia or your spouse’s sister, not as an expression of romantic love, nor even necessarily as an overt sign of affection, but rather as part of a greeting behavior. Kissing often has no more significance than a handshake in this situation and this is often the case in dogs as well.

For dogs, licking can communicate information about relative status, intentions, and state of mind but it is most frequently a peacemaking or pacifying behavior. We all know that after conflict, to pacify a situation, human beings often “kiss and make up.” Similar behavior has been observed by animal behaviorist Frans de Waal in chimpanzees for whom kissing seems to be a form of reconciliation after a spat.

For dogs, most pacemaking behaviors have a common element in that they usually contain aspects of puppy-like behavior. Juvenile behavior is the canine equivalent of a “white flag.” Most canine adults tend to nurture the young of their own species and there appears to be a strong inhibition against actually attacking puppies. Submissive, frightened or weak adults take advantage of this by adopting juvenile postures and performing infantile actions to avoid aggression. Such behaviors usually soften the mood of the threatening animal and will normally avert any sort of physical attack. Many forms of pacifying behavior contain licking components, so it makes sense to look at the early lives of dogs to interpret what these signals were meant to communicate in their earliest stages.

How Licking Became a Form of Communication

Dogs are first introduced to licking by their mother immediately after their birth. Once the puppies are out of the birth canal, the mother licks them to clean them up. This same licking also serves to stimulate their breathing. In the days that follow she continues to lick the puppies to groom them. Much of her licking is focused on the anal and genital regions to stimulate urination and defecation. I think that a convincing case can be made that the mother loves her puppies; however, when she is licking them she is using her tongue to groom them, not to kiss them. Because she loves her baby, a human mother may wash her infant and may change its diapers to keep it clean. Yet I am sure that no one would say that changing a diaper is equivalent to kissing. Dogs effectively keep their puppies clean and remove their urine and feces with their tongues because they simply do not have the dexterity to keep their puppies clean with their paws and certainly do not have the ability to diaper and bathe them.

As the puppies grow older they begin to lick and clean themselves and their litter mates. This mutual licking and grooming serves several social functions. Obviously, it helps keep the puppies clean, but in the process it helps to strengthen the bonds between the puppies. A puppy can thus have companions who get at those hard-to-reach places like ears and backs and faces, and they pay them back by licking their littermates in their own inaccessible regions. Since friends and familiars groom friends and familiars as a considerate gesture, the very act of licking another dog develops significance as a means of communication. Licking thus shifts from being a utilitarian and useful act to becoming a ritualized gesture of affection.

Licking takes on another meaning a little bit later in the lives of puppies, usually around the time that they are becoming less dependent on their mother’s milk. In the wild, when a mother wolf returns from hunting she will have already fed herself on her quarry. When she enters the den, the puppies gather around her and begin to lick her face. To a romantic, this may look like a loving greeting with all of the puppies overjoyed at mother’s return after her absence of several hours. They are seen as simply kissing her in happiness and relief. The actual purpose of all of this face-licking, however, is much more functional. Wild canines have a well-developed regurgitation reflex and the puppies lick their mother’s face and lips to cause her to vomit up some food. It is more convenient for the mother to carry food in her stomach rather than trying to drag things back to the den in her mouth. Furthermore, this partially-digested material makes ideal dining for young puppies.

So Is Licking the Equivalent of Kissing?

Understanding the development of licking behavior helps to interpret another situation in which it occurs. Face licking in adult canines can be a sign of respect or deference to a more dominant dog. The dog doing the licking usually lowers his body to make himself smaller and looks up, adding to the image of juvenile behavior. The dog receiving the face licks shows his higher status by standing tall to accept the gesture, but does not lick the other dog in return.

So now when a dog tries to lick your face you should have a better idea of ​​what he’s trying to communicate. He may simply be hungry and asking for a snack. Obviously you will not regurgitate some food at that signal, but you might respond affectionately and perhaps give him a treat. He may be communicating submission and pacification – the adult version of good will and acceptance in puppies. Basically, he is saying, “Look, I’m just like a puppy that is dependent on big adults like you. I need your protection and help.” Alternatively, he may be showing respect and deference to you since you control the resources that he depends upon.

Licking, then, is a complex signal and is clearly not always the canine equivalent of kissing. It does send some important social messages which we can read by reading the pattern and context of the licking behavior. However, since none of these messages are hostile in any way, I have no qualms telling my grandchildren that they are being kissed when my dogs lick them. It is certainly as harmless a myth as Santa Claus or the Easter Bunny, and it brings with it an equivalent dose of joy to the individual being licked.

Copyright SC Psychological Enterprises Ltd. May not be reprinted or reposted without permission