For many medical professionals, the most challenging aspect of their jobs is this: “When patients are emotional and distraught, I often feel helpless and incompetent in the face of their suffering.”

If you’re a doctor, nurse, or allied practitioner, this sentiment may resonate deeply with you.

My adventure started on the ski slope in early spring. I hit a bump, lost a ski, and landed in a pile of soft snow, but my poor thumb was painfully wrenched by my ski pole. Turns out, I tore two muscles, all three ligaments — one completely — and knocked the bone out of the joint.

When I saw the x-ray image on the monitor, my stomach dropped. A bone awkwardly askew, I knew for sure I was going to need surgery. And I was primed to have some feelings about it. This was the sixth event within the previous six weeks that involved expensive repairs or a loved one dying.

The surgeon introduced herself and started manipulating my thumb, which hurt like the dickens. I burst into tears. But instead of the doctor saying something like, “Hey, I see you’re having some intense feelings; do you want to talk about it? ” she presented her analysis— “I know, I know, it’s really hard to be a super-active person and then something like this happens, and you will not be able to do much for a while. I’m so sorry. ”

This was basically her way of saying, I’m noticing your feelings, and here’s my guess about what’s going on, so let’s not talk about it, as I’m super uncomfortable and overwhelmed by your display, which seems kind of over the top — just saying. And then she proceeded to tell me that she would recommend fusing the joint instead of fixing the soft-tissue damage. She explained, “Fusing the joint is a much easier, straightforward recovery, and, gosh, you’re so sensitive, this is obviously the best option. ” She objected when I asked to have an MRI, because, “What’s the point? We’ll just fuse the joint. ” Which is not what I wanted, but she was adamant.

So, what’s happening here? She tried to manage my painful feelings with a quick-fix show of empathy. In the process, she completely disconnected from me. She avoided the opportunity to gather information about what was actually going on with me. Instead, she made assumptions and decided on “the best treatment” according to those faulty assumptions, basically making an uninformed decision, thereby recommending the wrong surgical plan for me.

This story shows what happens when a practitioner defaults into “protect and direct mode.” In an effort to protect a patient from distress, they take charge, sweeping away messy feelings and directing the patient toward the next step. Note, they are also protecting themselves from sitting with a patient’s distress, by making an action plan in order to feel competent and grounded. But it’s a false competence and unstable grounding. The result: Practitioner and patient are disconnected from each other and from the art of healing, which often leads to practitioner burnout and patient dissatisfaction. Because, here’s the problem — she was not even talking about my feelings! She had zero idea what was going on with me because she did not ask. Furthermore, my feelings did not need fixing. My thumb needed fixing!

So, essentially, she tried to fix my feelings and decided she was not going to fix my thumb — the epitome of disconnection, which feels like the opposite of caring, and patient outcomes can suffer. 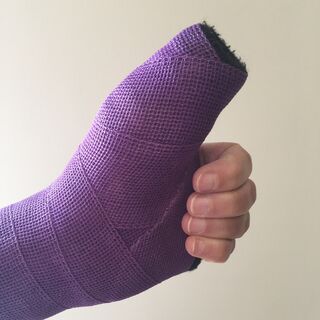 Thankfully, I had the fortitude to insist on an MRI, and after an endless four more days, she handed me off to a surgeon who exclaimed, “Fusion? That’s bullsh * t! Based on your MRI, I’d recommend repairing it — what d’ya say? ” I agreed wholeheartedly and went under the knife two days later. I was in a cast for five weeks and am now doing intensive rehab. It’s not fun, but it’s going to be OK. And life will be far easier with two properly working, opposable thumbs.

But let’s go back to the first surgeon. What could she have done to provide higher-quality care?

She could’ve seen my tears and taken a deep, calming breath, enabling her nervous system to relax, which is key to practicing compassion. I would’ve resonated with her calm nervous system, thereby calming my own, and then we could have had a conversation that included her asking about my feelings, with an attitude of, “Tell me more?” Then she would’ve gotten the whole picture and realized— “Oh, this is just the straw that broke the camel’s back,” and she would’ve actually been attuned to me. And as I calmed and we connected, she could’ve laid out all the options and we could’ve made a collaborative decision about the best surgery for me and my thumb.

I’m guessing most of us can identify with this surgeon — at times feeling overwhelmed by someone else’s emotional pain and suffering. We often rush in to fix it, such as telling someone that “time heals,” or that their adversity is a “blessing in disguise,” or judging them as “too sensitive.” We do this because it can be emotionally difficult to witness another’s suffering. But this story underscores the importance of practicing compassion, which lets us connect with people in emotional pain without drawing us into their suffering and making us feel overwhelmed. We can remember that this is their journey, and we become a nonjudgmental witness who is willing to simply listen and hold space for whatever feelings they have. And we can say, “I’m sorry,” not because we are trying to fix it, but because we connect and understand.