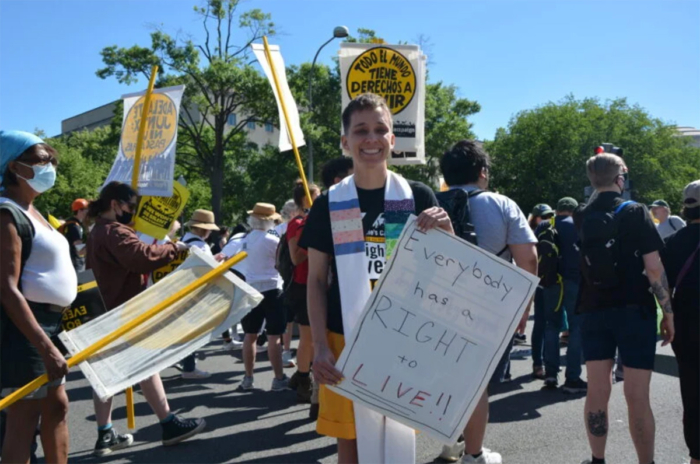 [Religion News Service] Thousands of clergy, union leaders, activists and scholars rallied near the US Capitol on June 18 at a march organized by the Poor People’s Campaign, calling on Congress to take action and address the plight of millions of Americans struggling with poverty and low-income .

“This level of poverty and greed in this, the richest nation in the history of the world, constitutes a moral crisis and a fundamental failure of the policies of greed,” thundered the Rev. William Barber II, a Disciples of Christ minister and co-chair of the Poor People’s Campaign, as he opened the Mass Poor People’s and Low-Wage Workers’ Assembly and Moral March in Washington.

“The regressive policies that produce 140 million poor and low-income people are not benign,” he continued. “They are forms of ‘policy murder.'”

What followed was a more than five-hour rally, featuring an array of mostly liberal-leaning speakers. Their theme was the way a complex of policy failures conspire to keep the poor in dire straits.

The massive march – turnout, though lower than what organizers initially aspired for when they began planning roughly a year ago, was still sizable – was the culmination of years of organizing by the Poor People’s Campaign, patterned after the Rev. Martin Luther King Jr.’s final project before he was assassinated in 1968. 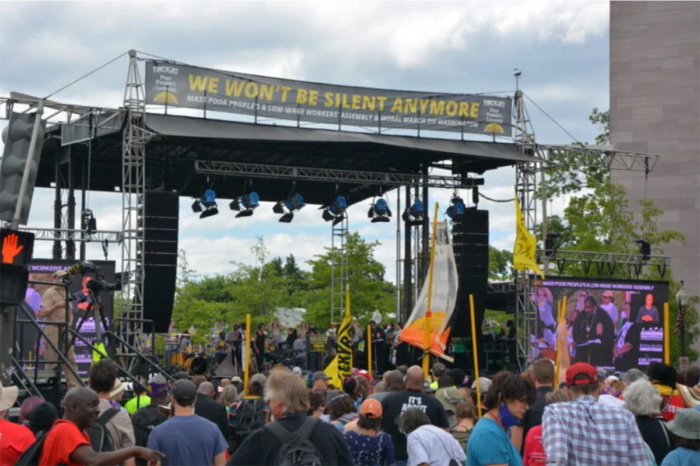 The event doubled as a show of progressive political force. Signs in the crowd called for a federal job guarantee, passage of the Green New Deal and new gun control laws. Several speakers represented secular progressive organizations, such as Greenpeace and Planned Parenthood, as well as various unions. The crowd cheered the activist academician Cornel West.

But more than 20 religious clergy and other voices kicked off the event with an interfaith litany. Indigenous, Hindu, Muslim, Afro-Caribbean and Jewish traditions were represented, along with an array of Christian denominations, including the Presbyterian Church (USA), the Episcopal Church, the Evangelical Lutheran Church in America. The American Service Friends Committee, an arm of the Quaker church, also appeared, as did the Catholic Sisters of Mercy.

“We gather on these streets in the spirit of the Prophet Amos who declared:‘ Hate evil, love good and establish justice in the public square, ”Sheila Katz, head of the National Council of Jewish Women, told the crowd.

The crowd, too, was thick with clergy, many of whom wore shirts with slogans such as “God is love” or “Jesus was a socialist.”

Shane Claiborne, co-founder of the group Red Letter Christians and a fierce opponent of the death penalty and gun rights, sported a cross fashioned from a melted firearm. Claiborne applauded the focus on gun control at the rally, which he said reflected the surge in attention to gun violence in recent months following a slew of mass shootings.

“The prophets Micah and Isaiah, when they said God’s people beat their swords into plowshares – that’s people taking it into their own hands. They don’t wait for change to come from the top down, ”Claiborne said. “I think that’s what’s happening here. Water boils from the bottom up, and there’s something going on in our country. “

Elijah Anthony, wearing a colorful stole and a holding sign that read “Everybody has the right to live,” said he drove from Boston to attend the rally. A seminarian and member of the United Church of Christ, he works with a church that caters to the unhoused.

Anthony said he appreciated the Poor People Campaign’s encyclopedic approach to protest. “This is about dismantling systemic injustices, and I really love that the Poor People’s Campaign talks about the interlocking social injustices that are happening – that it’s not just one thing, but we have to tackle everything together,” Anthony said.

The Rev. Amanda Weatherspoon, a Unitarian Universalist minister, huddled close to the stage with another clergy. “Our principles and our values ​​are centered around collective liberation,” she said, noting and she was particularly concerned about health care, income inequality, and caring for the unhoused. “Our denomination and my own congregation are very justice focused.”

One of the Poor People’s Campaign’s expressed goals for the day was to impress on Congress the voting power of the poor and their allies. Last year, Reps. Barbara Lee of California, Pramila Jayapal of Washington and Jamie Raskin of Maryland teamed up with Barber and Theoharis to unveil a sweeping anti-poverty omnibus resolution called the “Third Reconstruction: Fully Addressing Poverty and Low Wages From the Bottom Up.”

But President Joe Biden, who has endorsed the campaign’s work, has yet to respond to Barber’s repeated requests to host a summit on poverty at the White House, and the Third Reconstruction resolution has not gained widespread support on Capitol Hill.

Barber and Theoharis reiterated their demands while addressing the crowd on Saturday, calling on Congress to “publicly acknowledge the pain of 140 million poor, poor people” and “commit to creating and supporting legislation that reflects our Third Reconstruction agenda.”

Barber also voiced frustration with a lack of response from the White House.

“I know the phones work and emails work,” he said. “We demand a White House poverty summit with President Biden, to allow this administration to meet with a delegation of poor and low wealth people, religious leaders and economists – now!”

Down Pennsylvania Avenue, the Rev. Neal Christie, executive minister for connected engagement with the Baltimore Washington Conference of The United Methodist Church, held a sign that demanded Congress pass the Third Reconstruction omnibus resolution. As a former staffer at the UMC’s advocacy office on Capitol Hill, he understood the difficulty of getting laws passed. But, he said, “With Congress we have an opportunity to appeal to their moral conscience.”

Barber vowed to keep up those appeals, announcing that the Poor People’s Campaign would return to Washington in September for “non-violent direct action all day in the halls of Congress.”

As the event drew to a close, Barber approached the microphone and turned the event into something resembling an altar call.

Barber said he had been “wrestling with death” amid the pandemic, feeling guilt about those who have died while he continues on as an immunocompromised person. But after consulting with God, he said, he got an answer from the Holy Spirit.

‘The question is never,’ Why are you still here? ‘ Question The question is, what are you going to do? ” he said. He encouraged listeners to turn to their neighbor and say, “As long as I got breath, I’m gonna use my breath to breathe a little more justice, and more love and more truth in this society.”

With that, musicians began to play Tasha Cobbs 2013 song “Break every chain,” which the crowd took up, swaying together, hands raised.