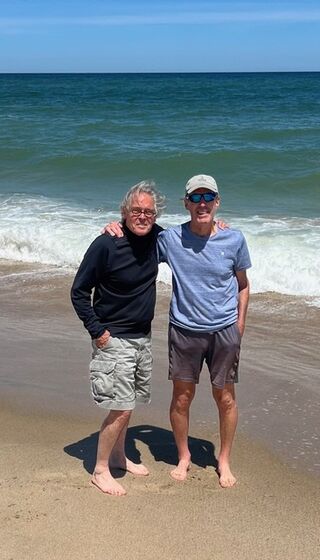 Paul Berry knows something about the state of mind. Nothing shallow about this man.

My close friend earned a master’s in social work from Boston University in 1978 — first working with the Massachusetts Department of Mental Health and the Department of Social Services, then as a practicing licensed independent social worker (LICSW) in the Boston area and on Cape Cod .

Paul, 71, has devoted his professional life to helping others find peace — often a dash to daylight through a dense fog.

Paul himself has been an avid runner most of his life, including two Boston Marathon appearances. His best time: a respectable three hours, 48 ​​minutes, averaging eight-minute miles on a 26.2-mile course.

Now Paul is running for his life.

In July 2021, he was diagnosed with bulbar onset ALS, a fast-track, complicated variant of this horrific disease that reaches far deeper than the somber symbolism of an ice bucket challenge.

ALS, also referred to as “Lou Gehrig Disease,” can strike in two ways — limb onset and bulbar onset. Limb onset initially affects limbs (arms and legs) and accounts for the majority of all ALS cases. With bulbar onset, symptoms first befall from the neck up, a far faster demise than limb onset.

Stephen King could not have designed a more horrific plot.

After confirmation of the diagnosis at Mass General Hospital, Paul’s hopes were dashed, but his faith persevered. Yet, he was devastated and was seeking a parole from this death sentence. But there is none. The realization stunned his wife Fran Schofield and two sons, Ben, 31, a paramedic in Virginia, and Ross, 27, a union organizer for the Massachusetts Teachers Association.

Today, Paul has lost most of his speech, often communicating through a laptop keyboard and a voice-activated device similar to the one used by the late theoretical physicist Stephen Hawking.

Paul can no longer swallow, nor can he consume solid food. Doctors at Mass General have fitted him with a gravity-fed gastric feeding tube, a device that supplies vital nutrition to the stomach through an incision in the abdomen.

He lifts his shirt to show me.

A courageous fighter, Paul still counsels clients, via Zoom, as he can; he still has use of his limbs. Tenacity defines Paul, though he counts his future in months, not years.

On a recent cloudy, misty day, Paul met me in the privacy of my studio on Outer Cape Cod to talk openly about his diagnosis, his progression, his faith, and his love of family. He used a variety of strategies to communicate. I’ve known him for close to 30 years; the moment for us was solemn, tearful — two old friends, one with ALS, the other with diagnosed Alzheimer’s. I felt guilty, knowing that I would survive in my Alzheimer’s longer than his ALS: one slowly robs the mind; the other consumes the body in rapid form. Paul’s mind is still brilliant in the swift decline of physical functions.

Days earlier, Paul and I took a bike ride up the road to Coast Guard Beach. In his gut humor, he has given both of us a nickname: “Al.”

“It’s a code,” he says, “for ALS and Alzheimer’s.” I tell Paul halfway through the bike ride that if we get lost, we’re both screwed. He laughs heartily.

Back in the studio, Paul tells me that he encourages his wife and sons “to walk in acceptance of this situation.”

Faith has played a critical role in Paul’s final laps. A strong Christian, he regularly attends Brewster Baptist Church with me, and on some days the nearby First Parish Brewster Unitarian Universalist Church. He’s also active with a Buddhist meditation group.

“My faith and understanding of God is central to my life,” he adds. “The teaching of Buddhism brought me back to my Christian faith.”

I ask Paul if he’s afraid of dying.

“Strangely, I’m not,” he says. “I have accepted the fact that death is coming faster than I wanted. Dying is just part of life. It matters so much what one does on the way out… ALS has brought me to a closer experience with family, friends, and even strangers through love. ”

Paul reflects on the “Iron Horse,” New York Yankee Hall-of-Famer Lou Gehrig, whose strength and endurance is a role model in all seasons of life.

“I felt confusion as a boy listening to the words of Lou Gehrig at Yankee Stadium,” Paul says. “Despite having to retire earlier than expected due to his ALS, Gehrig declared himself to be ‘the luckiest man on the face of this Earth.'”

“I understand now,” Paul adds, “in ways most people would not imagine”

Still, his family and friends, the ones to be left behind, are trying to fully grasp.

In a separate interview, his wife Fran, a political and environmental activist and a Cape Cod Realtor, says: “My husband has accepted the awful hand of bulbar onset ALS with a spirit of strength, endurance, and dignity. These have been enormous gifts to our family as we work to accept Paul’s condition and our collective future. Christian faith and Buddhist teachings — lessons Paul imparts to clients — have enabled this spirit. We are grateful for his strength and courage. “

So are Paul’s clients. Notes one of them, who has been a client for several years, “It was an easy decision for me to continue working with Paul after his diagnosis. As I knew, this would require a significant degree of letting go — also that it would require me to practice accepting the way things are in the present moment. ”

Writes New York Times best-selling novelist, Lisa Genova, Harvard-educated neuroscientist and author of the award-winning ALS novel Every Note Played, Still Alice, and others, “I’ve borne witness to the quieter heroes (like Paul) of this disease…

“If we do not ignore, delegate, resist, or panic over our dying, if we can appreciate that we are still living while dying, we have the opportunity to die with grace.”

Grace in dying comes full circle back to faith. Notes Paul’s pastor Doug Scalise at Brewster Baptist Church, “I have such deep respect for who Paul is as a person and how he has handled a very difficult situation. None of us is getting out of this world alive, but to accept the reality of death is still difficult, especially when it approaches sooner than we’d like and in such an insidious manner. ”

It is now late in the afternoon; Paul is tired — lots of emotion expended today. He’s ready to head home. Leaving the studio, he hands me a printout of something he had written for the interview: “Though God is beyond my mind’s capacity for understanding, my faith provides comfort and hope that life is meaningful, and that it truly matters that I — or any of us — have been here at all. ”

Paul pauses, then quotes from scripture, “So death, where is thy sting?”

Greg O’Brien, a career journalist, is the author of On Pluto: Inside the Mind of Alzheimer’s and co-producer / writer of the Alzheimer’s documentary Have You Heard About Greg?