In 2000, when my son and I started the Donor Sibling Registry (DSR), the predominant conversation was about disclosure. Back then, many, mostly straight, parents were invested in keeping the secret and came from the point of view that, as a parent, disclosure was their personal choice to make for their family. They did not like to hear about why not telling (lying by omission) might be harmful to donor-conceived people (DCP) and unhealthy for their families. They did not want to hear that secrecy implied shame.

Lying is done with words, and also with silence.

Some felt attacked and offended when offspring or other parents gave reasons as to why lying to their child was not right. They stuck to their guns, even when they heard from DCP who reported feeling like their world had been turned upside down when they discovered the truth later on in life. These parents insisted that they were not telling their children because it would “hurt the child” to know the truth. They did not want to hear that nondisclosure was more about their own or their partner’s fears of not being viewed as the child’s “real” parent and / or their own or their partner’s shame of infertility and not at all about what was in the best interests of the child.

Should a parent’s right to secrecy trump a child’s right to the truth?

Healthy relationships are built on foundations of trust and honesty. We expect honesty from our children; should not they expect the same from us? Some parents are reluctant to tell their children that they were conceived with donor gametes because, for decades, it was strongly advised by the physicians not to tell. This information is therefore portrayed as “private” or “confidential.” Married, heterosexual couples are much more likely to feel this way than either single women or same-sex couples who use donated gametes. In many cases, heterosexual couples have not shared the information with any close friends or family. This type of secrecy implies shame. 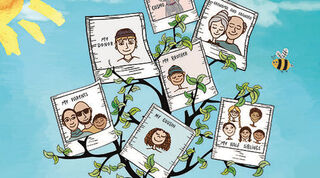 Parents who believe their children deserve to know their genetic origins tend to frame the issue in terms of “honesty” versus “secrecy.” They value openness in the family and believe that secrets can be damaging to relationships, dangerous, and uncontrollable. For example, in cases where there are some other people who do know the circumstances of a child’s conception, there is always the risk of unplanned and traumatic disclosure by someone besides the parent.

Why do children benefit from being told about the circumstances of their conception?

Can you imagine living your entire life basically a lie of who your father was? Looking back I always knew something was not right. I am not going to blame my parents because they were told by the doctors to never tell; however, I still feel it was best to be HONEST. It would have truly shaped me in a different way. They are now saying tell your children AS EARLY AS POSSIBLE because of the psychological effects. Was it traumatic? You bet !!! Imagine looking in the mirror and trying to figure out who you are again? I was angry, hurt, traumatized, broken, lost, and it was a long grieving and healing process. Do I still believe my parents loved me? Absolutely. Did I still believe my parents believed they were doing the best for me? Yes, absolutely. However, this was not an easy walk. Now, I am choosing not to hide my IDENTITY of WHO I AM. I will not keep it a secret and follow the same path and be filled with shame. Just like when we know someone was adopted, it is very similar in that way. We go through the same psychological factors as when someone does not find out they are adopted until later in life.

Talking honestly, even to very young children, and modeling these conversations so that children can feel confident about sharing their origin stories, especially when the parent is not present, is vital. Parents can start this dialogue when their children are preverbal so that it becomes an integral part of a donor child’s identity. As with many conversations with young children, they might not comprehend the depth and breadth of all the concepts, but they will gradually absorb the facts as they mature. Creating these cornerstone conversations to build upon as a child matures is essential.

Telling is the first step.

After the DSR was founded, parents were, for the first time, able to make mutual consent contact with their child’s half-siblings and donors, and that raised new issues about disclosure. Parents who had always told their children that they were donor-conceived now also needed to decide when and how to tell their children about new relatives that had been found.

Counting is only the first step to creating healthy donor families. Just because a child knows that they were conceived with the help of a donor does not mean they will have peace with not knowing about one-half of their identity, including their ancestry, medical background, and close relatives. This is why the conversations on the heels of disclosure are extremely important.

Parents can acknowledge, honor, and validate any curiosity that DCP have about their unknown first-degree genetic relatives. They can support any desire that a DCP has to search for and connect with these relatives. Conversations can be welcomed, ongoing, and affirming. Need help? While some children’s books explain donor conception, many end with “and then you were born!” But that’s not the end of the story, it’s just the beginning.1